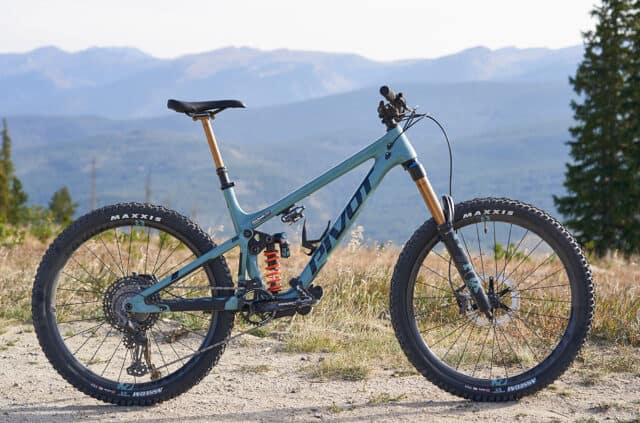 Everyone has their own preference when it comes to mountain and trail bikes; some prefer a bike that is great at following trails downhill, whereas others have their strength in taking you up hills. When you place the following two trail bikes, the Pivot Mach 6 vs Bronson, in a head to head, is there a big difference?

While these two bikes have many similarities, such as their 27.5 inch wheels and both have around 6″ of travel, the bikes are also considered different in many aspects. The Pivot Mach 6 is regarded as a great overall trail bike, whereas the Bronson performs at its best when riding down steep descents.

Choosing a new mountain bike can be a hard decision given the number of trail bikes now available on the market. However, two choices rise above the rest for experienced and beginner riders alike; these are the Pivot Mach 6 and the Bronson.

When you ask the question, Pivot Mach 6 vs. Bronson, you will more than likely get fans from both sides of the mountain bike world arguing on behalf of their favorite. Both bikes have their fans, and while they share some common similarities, there are also a few differences that will suit individual riders.

Both of these bikes are considered top of the line enduro bikes and are great for trails. They both have great suspensions and are matched evenly with 6″ on travel. Both have 27″ wheels, and for all, out of control, most regular riders couldn’t find much difference.

We know it can be difficult when it comes down to choosing a new trail bike or simply researching bikes to help you make a future decision. So we have made it easy for you by setting up a Pivot Mach 6 vs Bronson debate that will answer all your questions.

We will first take a look at the main features of each of the bikes before we move on to determine what the differences are so that you can decide for yourself what’s better in the Pivot Mach 6 vs Bronson debate.

Highlights Of The Pivot Mach 6

The Pivot Mach 6 is one of the best enduro bikes on the market; having first debuted back in 2013, it was seen as a pivot premium endurance mountain bike. It has had four upgrades over the years, yet the design has stayed relatively similar.

The newest version, released in 2021, received hollow cored carbon fiber frame that was designed to accompany the vertical shock layout. The original DW link suspension remains, hwoever, the shock is now positioned parallel to the tube of the seat. This results in fewer mocing parts around the frame annd much straighter tube shapes, resulting in a smoother and classier trail bike.

The newest version of the Pivot Mach 6 has 158mm rear wheel travel that’s accompanied by a travel fork of 160mm. It has wheels that are approximately 27 inches and are perfect for old school riders, as well as new age riders looking to try a change from their usual 29 inch wheels.

The Pivot Mach 6 boasts 157mm x 12mm Super Boost back end, which is accompanied by 27 inch wheels. Pivot assures us that the much wider rear end is still great for both overall strength and stiffness even with 27 inch wheels.

When it comes to climbing hills, the Pivot Mach 6 is considered the best on the market. It’s a strong bike that can achieve high levels of rolling resistance to get you over any bump your bike comes up against. When riding this bike, it’s almost like the tires are glued to the ground during both acceleration and climbing, giving you a smooth and confident ride on any terrain.

The Pivot Mach 6 is a great bike when all things are considered, and the 27 inch wheels provide agile handling that is especially suited to shorter riders. The pricing starts at around $9,000 but can easily reach $19,499 for the best model available.

Highlights Of The Bronson

Santa Cruz released the latest version of the Bronson, titled the Santa Cruz Bronson CC X01 AXS, in early 2022. The Bronson has always been one of the best enduro bikes on the market and almost has it all when it comes to both enduro racing and flat-out trailblazing.

The newest version of the Santa Cruz Bronson has 150mm of rear wheel travel, but they changed the wheel size as it now has 29 inches in the front and 27 inches at the rear.

The following mixed wheel Bronson has a carbon frame that is slightly heavier than the former model. A travel fork of 160mm accompanies the rear wheel travel up front.

Like many of the other bikes in the range, the Bronsons rear triangle is attached to the front via two counter-rotating links, with the lower driving the shock. This is known as the virtual pivot point suspension system, which delivers the bike’s travel.

According to Santa Cruz, the latest incarnation of the Bronson has less suspension resistance as the bike is being peddled and a little less pedal kickback. This has resulted in a smoother ride for adventurous trail riders.

The manufacturer is the only company to pair suspension components from various manufacturers, as they combine a FOX 36 GRIP2 fork and a RockShox shock.

The price for this model begins at around $3,500 but can reach up to $8,000 with additional features such as a frame made from Carbon CC. However, if you’re serious about your enduro bikes, it doesn’t seem like that much, does it?

Pivot Mach 6 Vs. Bronson: The Differences

In our debate, the Pivot Mach 6 vs Bronson, we’ve shown that they are both excellent bikes and have multiple similarities that could leave fans on enduro mountain bikes stuck when it comes to choosing their preference.

We will now focus on a few differences between the bikes, which may help one decide which is the better bike in our question; Pivot Mach 6 vs Bronson, and which bike would serve you best.

When it comes down to what you want the bike for, there are a few noticeable differences in the bikes. The Pivot Mach 6 is probably a bike better suited to all riders, whether you’re a beginner or an experienced rider. The Pivot Mach 6 is also a beast when going up steep hills and beats all the other competition here, thanks to its DW-link suspension.

Whereas if you’re going down the trails at a decent speed, the Santa Cruz Bronson is probably the bike you want your body on. Because of the suspension design, this bike is excellent for downhill trails and gives the rider complete control over the chassis, even on the most demanding tracks.

The next difference is that the Pivot Mach 6 gives you a lot better acceleration when compared to the Bronson. While this isn’t a big deal for everyone, for those who are after a good pedal acceleration, the Pivot beats the Bronson here.

The Pivot Mach 6 has two 27 inch wheels, whereas the Bronson has a mixed set of 29 in the front and 27 inches in the back. Thus, if you’re looking for a bike while agile handling or you’re a smaller rider, the Pivot Mach 6 is probably the better bike in this scenario.

When it comes to breaks, the Bronson is the clear loser in this category thanks to its powerful SRAM Code RSC four-piston brakes, which in theory, should be great. Yet, they often overheat quickly, resulting in a spongy bite point and a severe pump on your arms during long descents.

When it comes to the price of these bikes, there is a bit of a difference. The Pivot Mach 6 base price begins at around $5,000 and can rise to a steep $10,000 with additional add-ons such as a frame upgrade. On the other hand, the Bronson starts at approximately $3,000 and will increase to around $8,000 if you want to add on the Carbon CC frame.

Thus, as you can see, the Bronson comes out at around a few thousand dollars cheaper even if you were to max out the add-ons on both of these bikes, and for a downhill trail rider, it’s probably the better choice, thanks to its excellent suspension.

However, if the few thousand dollars in difference doesn’t seem like enough for you to settle with the Bronson, some would say the Pivot Mach 6 is the overall best bike in the enduro trail bike market. It has great overall handling, performs well on all terrains, and has the ability to take you up any hill with ease, thanks to its pedal power.

This article has discussed; Pivot Mach 6 vs Bronson, and we have given you all the information you’ll need to decide for yourself what the real differences are between these bikes and which one you may opt for in the future.