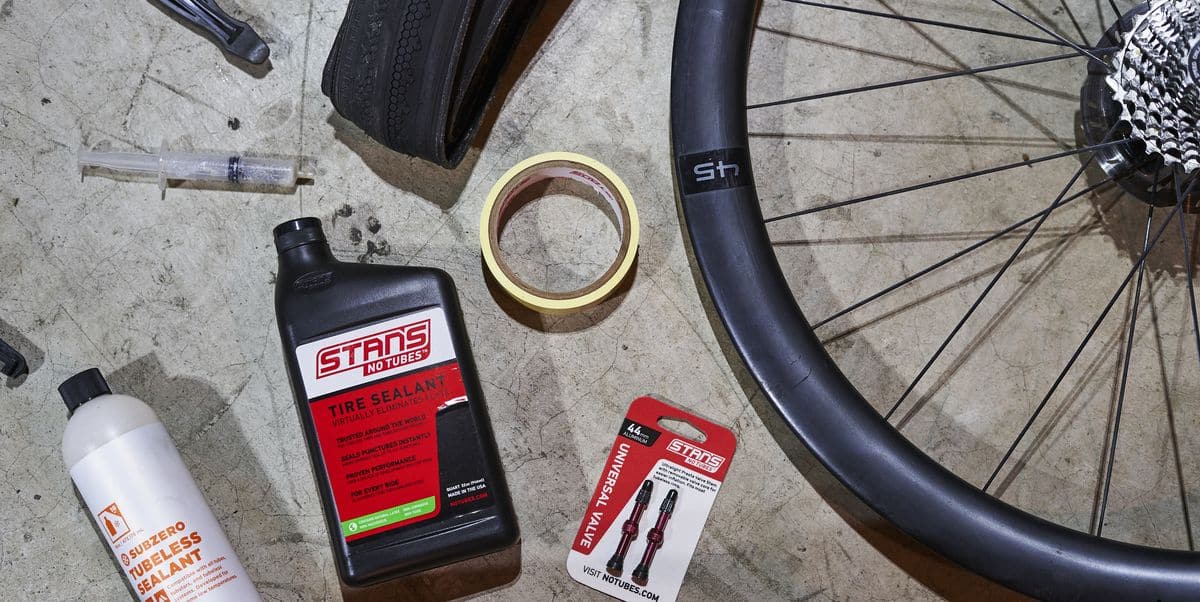 Stan’s and Orange Tire sealants enjoy a solid brand reputation amongst the members of the biking community. After all, if you spend a lot of time biking across rough terrain in tubeless tires, you are bound to have a flat every now and then. For the long-distance mountain bikers out there, tire sealant is simply a part of the kit that comes with it.

In a direct comparison of Orange Seal vs Stans, it’s difficult to lay out what makes one better than the other. Orange seals quicker but the sealant doesn’t last as long as Stan’s, especially in drier climates. Orange Seal also comes in three varieties, whereas Stan’s has just one.

Both tire sealants are exceedingly popular and there is no doubting the fact that there are numerous and heated disagreements on mountain biking forums everywhere. So what separates the two? Are there any unique differences and does one outdo the other? Orange Seal vs Stans, like most things, will probably come down to the small distinctions.

The best way to determine which one you should purchase is to simply do a straight comparison of both brands, including what makes them unique and what each product has to offer.

There are a few advantages that come with Stan’s, mostly in its longevity. In drier climates, you will only have to put sealant in your tire once every 2 to 7 months, which is determined by shaking the tire around to see if you can still hear the liquid. Orange Seal isn’t known for lasting that long and needs to be added more frequently.

Stan’s also has a lower operating temperature. If you’re out riding your mountain bike in -30°F weather, you’re either on Mt. Everest or you are a serious mountain biker. Orange is known for sealing faster, however, so in a pinch, you can expect a quicker seal on any kind of puncture that’s 3mm or less.

Both brands claim that their product can seal holes up to 6mm, but repeated and validated tests show that 3mm is the effective limit for both. Orange Seal vs Stans doesn’t offer much in terms of differing capabilities with punctures larger than 3mm.

When it comes to Orange Seal vs Stans, Stan’s has definitely been in the game a little longer. Looking for a bit of history on Orange Sealant is a bit of a headache, as their website is one of the most minimalist websites around.

Despite a dearth of information on Orang Seal’s origins, it’s quite a popular brand and tire sealants don’t become popular because they don’t work or don’t work very well. The Orange sealant comes in three variations, as well.

If you enjoy a mix of camping and mountain biking, then the odds are in favor of being out in frigid temperatures. While the standard Orange Sealant becomes useless at anything below 11°F, the Subzero variant keeps working down to -20°F, a temperature at which you don’t want your skin exposed for longer than a few minutes.

According to Orange, the Subzero variant is capable of sealing slices in the sidewall up to a quarter of an inch wide and punctures up to ⅛”.

While endurance maintains the fast-sealing that Orange Sealant is known for but doesn’t seem to make any strides in terms of how long the sealant lasts. According to Orange, the Endurance formula is supposed to last between 90 and 120 days, which puts it in line with the other two formulas in terms of longevity.

Like the other two, it is still capable of sealing punctures of up to 3mm, though any claims beyond that are questionable, whether you’re talking about Orange, Stan’s or any other mountain bike, tubeless tire sealant.

The biggest difference with the Endurance formula is the natural latex increase. It purportedly is capable of sealing from the inside out by bonding to the rubber, including the bead and around the rim.

Stan’s has been around for over two decades now and is typically the go-to tire sealant for tubeless, mountain bike tires. It’s considered to be a ‘classic’ formula and most bikers would easily recommend it, even if they use something else.

Like Orange, Stan’s is able to seal punctures up to 3mm in diameter and it can seal slices in the sidewall, however, it doesn’t appear that it seals the sidewall as effectively as orange. However, one thing that Stan’s has going for it is longevity.

Stan’s No Tube Sealant lasts longer than Orange by several months and they don’t have to market three, different formulations since Stan’s covers all of what standard Orange, Orange Endurance, and Orange Subzero do and, in some cases, does it better.

For instance, the original Stan’s formula is designed to remain in its liquid state all the way down to -30°F, while Orange requires a second formula type to achieve subzero temperature functionality, which also happens to come up short in temperature viability at -20°F.

Stan’s is also a little cheaper for a 16oz bottle, but not enough to make much of a difference in the minds of consumers. We’re honestly talking about a dollar difference, after all. Like Orange, Stan’s can be directly injected through the valve stem or poured into the tire once you remove it from the rim.

While Stan’s, like orange, is incapable of sealing anything larger than 3mm in diameter, it would seem that both products can seal larger holes on tires with lower pressure. However, without much in the way of evidence, that is merely speculation based on both Stan’s and Orange’s claims.

Stan’s does have a greater degree of longevity and although it doesn’t seal at the same speed as Orange, it still seals punctures quickly and you can expect Stan’s to hold up inside of the tire for a few months longer than Orange, especially in dry climates.

We’ve already covered Orange’s three variations, but they also come in a variety of ounces how many tire fills can you expect from the two?

Stans offers 2oz bottles, 16oz bottles, and 32oz bottles. You can expect the full, 32 oz bottle to last you anywhere between 8 and 16 tire fills, so a 2oz bottle isn’t going to go very far unless you purchase a whole bunch of them.

Orange offers 4oz, 8oz, 16oz, and 32oz volumes in all three of its variations and with a 32oz bottle, you can expect to get the same amount of tire fills as Stan’s version.

Stan’s also offers Stan’s Race Sealant which is relatively new and nowhere near as popular. It only comes in a 32oz bottle and is designed for just what it says, racing bike tires that are tubeless.

Stan’s also offers a number of companion tools and accessories that help you get your tires patched and back on the road in a hurry.

in every variation imaginable, their own, Orange Seal tubeless valve stems

, MTB Tubeless kits, and three variations of their sealant formula.

So, both Stan’s and Orange Seal have a lot going for them when it comes to tire repair, especially tire repair on the fly.

Orange Seal vs Stans – Which Sealant Should You Go With?

It really depends on what your need is and the climate that you happen to live in. If you live in a humid climate, Orange Seal may be the best choice for you. The humidity will help the liquid last longer, since that is one of its shortfalls, and it typically seals faster than Stan’s, along with better sidewall seals.

In drier climates, Stan’s is the better choice. It lasts a long time in drier climates and it seals relatively quickly. Stan’s is also better for northern climates where people experience frigid temperatures throughout the winter. It has a lower temperature rating, even lower than Orange’s Subzero formulation.

In terms of price, it’s really a wash. You can find both brands in 16oz and 32oz bottles for a nearly identical price, with maybe a dollar or two up and down either way.

When it comes to Orange Seal vs Stans, both brands are great products in their own right and, in most climates, you will probably do just as well with either of them. However, if you want peak performance, it boils down to where you live, the humidity, and how cold it gets each year.