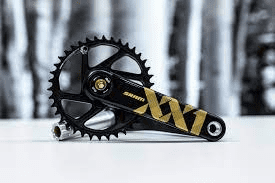 When SRAM first introduced the DUB crankset, it was meant to simplify and standardize bottom bracket and crankset fittings across their range of mountain bikes. While it certainly standardized things, we’re not so sure it simplified the process of removing a bottom bracket. Removing a SRAM DUB crankset still takes some patience and the right tools if you want to get it done correctly.

To remove a SRAM DUB crankset, you’ll need a torque wrench with an 8mm bit, an RT-1 Park Tool and a hammer, or a BBT-79 Park Tool, depending on which bottom bracket you have. Additionally, you’ll need a 2mm hex wrench to loosen the preload lockring. Once you have your tools ready, you can loosen and remove all of the crankset’s individual parts.

In this guide, we will provide a deep dive into everything you should know about the SRAM DUB crankset. We’ll share some background information about this new innovation and give a step-by-step explanation of how to remove SRAM DUB crankset.

What is the SRAM DUB Crankset?

The SRAM DUB crankset was first introduced in 2018 as a bottom bracket and crankset interface system that would work across all of SRAM’s mountain bike groupsets. The “DUB” in its name stands for “Durable Unified Bottom Bracket”. When SRAM first released the new crankset, the DUB was designed to create a more durable, easier to install and remove bottom bracket.

How to Remove SRAM DUB Crankset

In this guide, we’ll explain how to remove SRAM DUB crankset in both BSA threaded and BB30 press fit standards. Both standards require the appropriate bicycle tools, otherwise, you’ll struggle to remove the brackets without damaging your bicycle’s frame. Follow these steps to the letter to prevent scratches or chips.

Step 1 – How to Prepare the Crank and Bottom Brackets

For this step, you’ll first have to identify which style of bottom bracket your bike uses. You can easily identify a press fit bottom bracket by inspecting the inside of the bracket. If it’s completely smooth and fitted to your bike’s frame, it’s a press fit. If not, you’re looking at a threaded bracket. We will explain how to remove both styles individually:

To remove a press fit bottom bracket, you’ll need an RT-1 Park Tool. The RT-1 is a specialized bottom bracket removal tool designed to pop a press-fit bracket from the frame of a bicycle. To use an RT-1 Park Tool, you’ll also need a hammer or a rubber mallet to give the tool a sturdy smack. Follow these steps to get the job done:

To remove threaded SRAM DUB bottom brackets, you’ll need a BBT-79 Park Tool. This tool is specifically designed to interface with SRAM DUB crankset brackets and makes the job far easier than doing it by hand. Nevertheless, if you do not have a Park Tool, you can pry the brackets loose using a flathead screwdriver, a hammer, and lockable needle-nosed pliers.

If you try to remove a threaded SRAM DUB crankset bracket with a BBT-79 Park Tool, be careful to avoid scratching or denting your bike’s frame. If you resort to using a hammer or mallet, be gentle as you tap the set of pliers. Using too much force can strip the bracket and crack your frame.