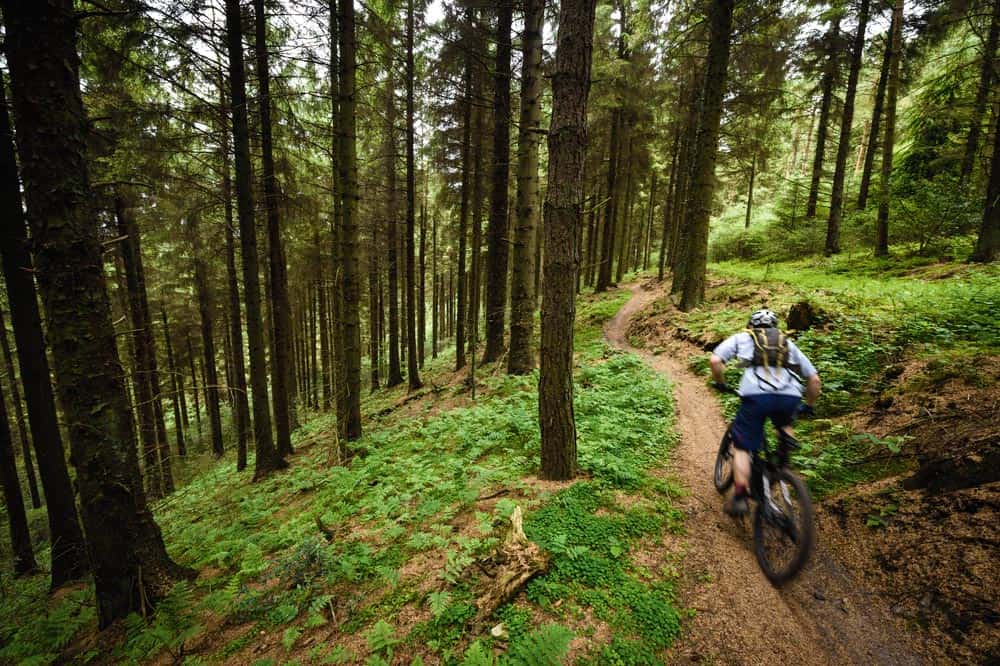 There are many ways to burn calories, but mountain biking is one of the best due to how strenuous it can be. But how many does it burn exactly? Well, it depends on many factors, such as the trails you ride and the terrain you ride on. Don’t worry, we’ll be covering all of this in detail down below.

So, how many calories does mountain biking burn? On average, you burn 13 calories a minute while mountain biking, but obviously, that can fluctuate significantly based on many factors. That means the average mountain bike ride burns about 780 calories in an hour. Not bad, considering that the average person burns 17 calories per minute running.

The Trail You Ride

The more strenuous your bike ride is, the more calories you are going to burn. Obviously, the harder you have to work, the better. This means that more difficult trails that require more effort to traverse will increase how many calories you burn. There are many things that can increase the physical difficulty of a biking trail.

First and foremost are differences in elevation. If you’ve ever tried to ride a bike uphill, you are well aware that it takes a lot more physical effort to do that than riding downhill. You have to work your legs a whole lot harder. So the more uphill riding the terrain in question has, the more calories you are going to burn.

The same is true of the opposite, of course. The more you are able to coast on your bike on the trail you are riding, covering distance without any (or very little) effort on your part, the less calories you are going to burn. Ride a really easy trail like that, and you may burn even fewer calories than the average 780 an hour.

But uphill and downhill isn’t all that matters when it comes to the difficulty of the trail. The actual ground you are riding on makes a big difference too. Riding on a smooth dirt road? That’s not terribly difficult and doesn’t require much extra effort on your part, so you won’t burn as many calories that way.

But if you are riding on a much rockier trail, or perhaps a muddy or bumpy one, that’s going to demand more physical exertion, which means you are going to burn more calories while riding on such trails. That part is pretty simple.

Length of the Ride

This one is kind of self-explanatory. Obviously, the distance that you can cover while mountain biking is going to have an effect on how many calories you burn. It’s hard to factor this one into an average hourly calorie-burn rate, however.

After all, different people can bike at different levels. Some people may only be able to bike a single mile in an hour. Someone else may be able to bike three miles in one hour. But one way or another, the distance that you cover while mountain biking has a big effect on how many calories you will burn while doing it.

When asked “how many calories does mountain biking burn,” it’s not just the trail you are riding on. It’s how you are riding your mountain bike. Riding in the saddle refers to you actually sitting on the seat of your bike as you ride. It’s the usual way to ride a bike, but also the less intensive way of doing it.

Riding out of the saddle is when you “stand up” in the bike, so to speak. Riders usually do this to put a little more power into their pedaling, but it’s also a more intensive way of riding a bike. That’s because it requires a lot more muscles to ride your bike in that manner, and naturally, the more muscles you have working, the more calories you will burn.

How many calories does mountain biking burn? Well, based on all of the factors that we mentioned above, you can probably guess that the amount of calories is more than you would get biking on a road. That’s obviously because the more difficult the ride, the better for burning calories.

This is not to say that biking on a road doesn’t burn calories, as you can find roads out there with plenty of hills to bike up. However, the average amount of calories burned in an hour while road biking is about 100 less than the average calories burned while mountain biking.

In other words, you could definitely still burn calories pretty effectively while biking on a road, but you would certainly burn a lot more while mountain biking.

All in all, it really comes down to how physically demanding the trail you ride on is. The more effort you have to put into the ride, the more calories you are going to burn, and the same is true of the opposite.

So if you are looking to burn as many calories in an hour as you can while mountain biking, you’ll want to look for a trail with rough terrain with a lot of uphill sections. Riding out of the saddle will increase the calorie loss even further.

Don’t be afraid to take breaks on your ride though. Efficiency is great and all, but not at the cost of your safety or health!

link to Ripmo Vs Hightower | What Is The Difference?

If you are trying to choose a bike, it’s important to do careful research into the different options so you know what you are getting and whether it is likely to suit you. It’s always tricky to...

Continue Reading
link to Ride Wrap vs InvisiFRAME - What Is The Difference?

If you have recently invested in a two-wheeled friend, you might be thinking about how you can protect the beauty and keep it looking like new for longer. Bike frame protection kits will help you...