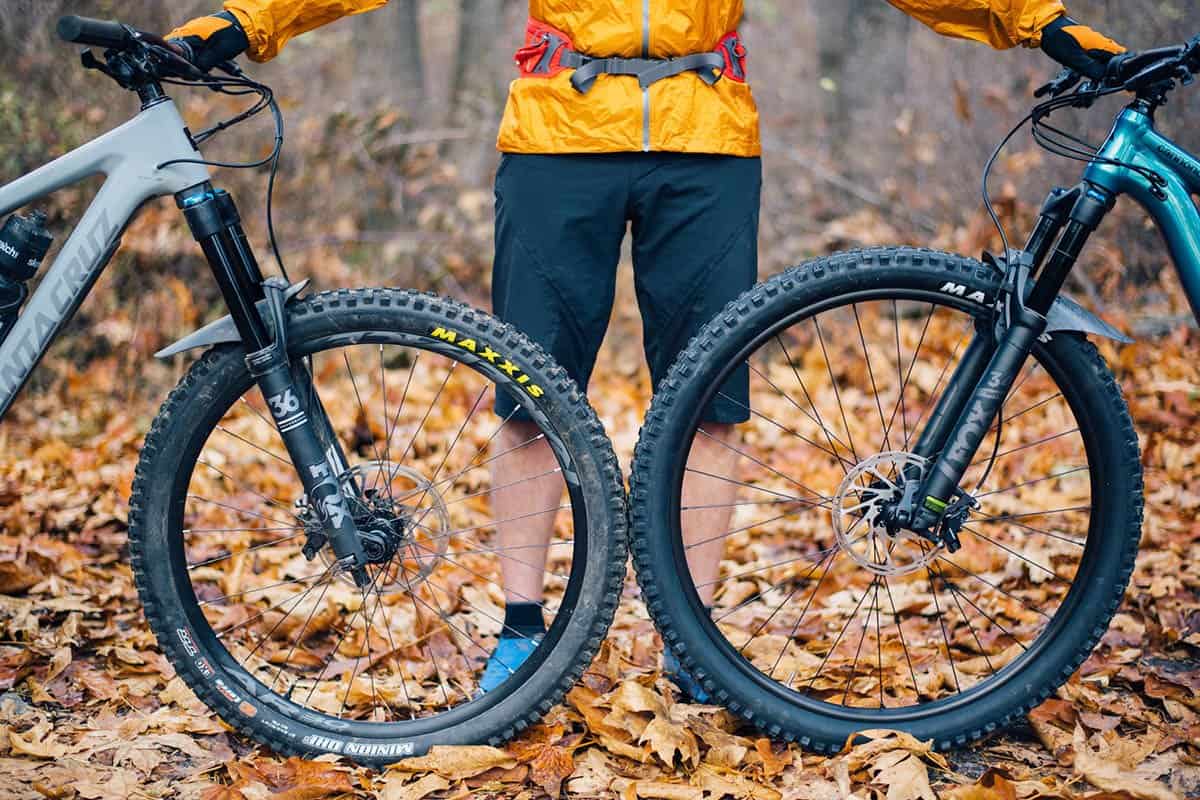 Assuming the bike and wheelset are both designed for disc brakes, the smaller 27.5” wheels will fit on a bike designed for 29” wheels. However, this may induce some unintended ramifications that are not well-received.

Replacing both wheels will mean there is reduced frame and pedal clearance. A larger frame and pedals with smaller wheels means the relative geometry of the bike sits lower than normal. This means that the bike is more likely to run up against obstacles than it would if it had the wheels it was designed for.

It should also be noted that bikes designed for 27.5” wheels have less clearance than 29” bikes have. But putting smaller wheels on a larger bike makes this issue more pronounced. Pedal and frame strikes will be more likely with smaller wheels.

However, one pro does include the ability to corner sharper because the bike’s center of gravity has been dropped.

There are several other variables going into this endeavor:

Read on to see the specific variables that answer the question of can you put 27.5 wheels on a 29er.

Because you can have different thicknesses of tires, there are a few different options focusing solely on the tires.

Accounting for changing only the size, should you opt to use identical tires for the 27.5” wheels that you would otherwise have used for the 29” ones, the bike will experience roughly a ¾ inch drop. This is because the difference between the two wheels is measured by the radius, rather than the diameter.

If you choose to go with a narrower tire on the smaller wheels, you will experience more than that aforementioned ¾ inch drop. This may be preferable, or it may start to cause issues. Namely, again, increased frame and pedal strikes.

In the event that you go for thicker tires than what originally came with the bike, you may not experience a drop whatsoever because the thicker tires would make up the difference of the smaller wheel diameter.

This option is actually arrived at from a different set of questions. Rather than questioning if smaller wheels can go on a larger bike, the question is, can my bike have plus-size or off-roading tires installed without lifting the bike too much. Some people want the benefits of “fat” tires while keeping their bike sized appropriately.

Mountain bike tires especially tend to run between 2.8 and 3.25 inches, which then starts to negate the loss of geometry when shrinking down to the 27.5” wheel.

However, this can still result in a lot of pedal strikes because they still sit slightly lower than they would with the 29” wheels. The center of gravity is also still dropped, allowing for sharper cornering.

In addition to tires, there are wheel variants to can you put 27.5 wheels on a 29er.

Replacing Only One Wheel Variables

If you replace only one of the two wheels with a smaller one, you change the angle of the bike. This is usually done intentionally to get a specific head tube or seat tube angle.

Replacing the Front Wheel Only

If you replace only the front wheel, you steepen the head tube and seat tube angles. There are pros and cons to this. A steeper head tube angle is considered retro but also undesirable. However, a steeper seat tube angle offers some nice pros, such as more efficient pedaling due to where the rider is placed relative to the cranks.

Replacing the Back Wheel Only

This creates several changes that are not nearly as negative as the reverse of this operation. The smaller wheel makes the head and seat tube angles slacker. The biggest con is the rider’s positioning relative to the cranks which can generally be mitigated by sliding the saddle forward on support rails – if the bike has them.

The pros then are exactly relative to the cons of putting the smaller wheel in the front.

Situations Where This is Not Possible

In the event that the bike’s braking system is rim braking, the wheels cannot be replaced because the rims of the 27.5” wheels will sit below the brake shoes, causing the brakes to not work. There are adapters, but the affordable ones are finnicky and the ones that work are cost-inefficient.

Given the cost of replacing wheels is already relatively high, an extra cost like that might not be worth it.

Conclusion to the question: Can You Put 27.5 wheels on a 29er

So, yes, you can put 27.5” wheels on a 29” bike frame. It is especially sought after when using fat tires for mountain biking or other trail riding. It may also be desirable when wanting to lower the center of gravity of the bike to increase cornering ability.

Other times, people will replace only the back wheel to create a specific effect and gain certain pluses to their riding experience.