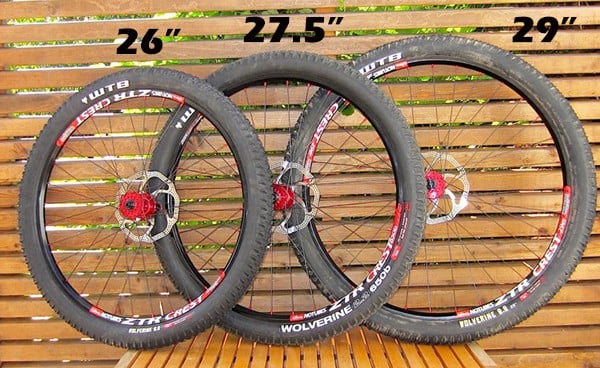 Are 27.5 wheels dead? Apparently, it looks that way, as consumers move away from 27.5” wheels in favor of 29” when it comes to the plus tire category. Of course, there will always be a small niche that continues to use them.

While 27.5” wheels are all but dead, it still remains on life support. When it comes to downhill and endurance riding, the 29” wheels seem to be stealing the spotlight, while 26” tires are still the best for regular bike riding, dirt jumping, and mountain biking.

It’s not necessarily the (are 27.5 wheels dead) question that’s interesting so much as why are 27.5 wheels dead? Or at least why are they dying? There are a few reasons for that, mostly centered around better wheel sizes for certain activities.

Are 27.5 Wheels Dead and Will They Stay That Way?

Are 27.5 wheels dead if some are still around? And if so, what is pushing the 27.5” tire out of the market? It used to be a pretty popular tire. However, most biking enthusiasts think that it was popular as a focal point of nothing more than a fad.

Now, if you visit your local bike store, you will find that it’s incredibly difficult to find 27.5” tires, and it’s not because they are so popular. It’s because bike stores aren’t selling them, so the numbers that they order are fewer and orders are farther between.

Nothing signals the death of an era better than stocking policies at local bike shops. If they don’t want it, it’s because it’s simply not selling. But why are 27.5 wheels dead and what caused their downfall?

Around the same time that the 27.5 wheels started to become the ‘must-have’ wheel on the bike market, 29” wheels came into the picture as well. At first, it was merely competition. Over time, however, the 29 started to push the 27.5 out.

New bikers really caught on to the idea of using 27.5 and 29 wheels on their bikes because it gave them more confidence out on the trail, especially when it came to mountain biking. They didn’t work out as well for more experienced riders.

Experienced riders are much more likely to seriously put a tire through its paces. As it turned out, 27.5 struggled to compensate for the punishment that intermediate and expert riders were putting them through, failing far more quickly than smaller tires.

It would seem that, as far as more experienced bike riders are concerned, 27.5 wheels are dead. But one person’s garbage is another person’s treasure.

Is There Still a Market for 27.5 Wheels?

Absolutely. You can still find 27.5 wheels on Amazon and from various other websites as well. They are mostly focused on mountain bikes rather than other bike types but they still remain.

For those asking, “are 27.5 wheels dead?”, the answer is not yet. One of the more popular manufacturers of plus tires is Salsa Cycles.

Salsa Cycles has seen its fair share of trends come and go.

However, Salsa Cycles still sells 27.5 wheels. The thing is, their 29” stock seems to be overtaking the sales of 27.5 wheels, slowly but surely pushing the latter out. Salsa Cycles claims that it is endeavoring to provide a large number of choices for its consumers.

While there is no data on 2020 to 2021 or the 2021 year to 2022, we wouldn’t be having this conversation if the percentage increased back to 2019 levels. As for right now, Salsa Cycles is trending more towards 29 wheels, although that size has taken a blow to its popularity as well.

What Are the Causes Behind the 27.5 Wheel’s Popularity Drop?

The biggest reason, according to biking enthusiasts, is that the new 1x drivetrain made the 27.5 and the 29 unnecessary. The 1x drivetrain altered the need for larger frames and everything was tightened up, allowing for the removal of the derailleur, manufacturing shorter chainstays, and including steeper seat angles.

All of these changes eliminated the need for 27.5 and 29 wheels in most categories. However, the 29-wheel seems to have found a few more niche bikes to fill in and is largely leaving the 27.5 wheels behind.

has reached territory that Salsa Cycles haven’t seen yet and according to the former, 27.5-wheel variants have completely dropped off while 29-wheel bikes are exploding in popularity.

That doesn’t mean that bikes with 29 wheels are becoming popular, just that when it comes to a niche category of bikes, it seems to be the one that’s thriving while the 27.5 wheels are going the way of the old Beta Max cassette players.

Santa Cruz Bicycles is another major retailer that has seen a steep drop off in the number of 27.5 wheels being sold. According to their retail numbers, when it comes to the larger wheels, the 29 outsells the 27.5 by a 9 to 1 ratio, which is pretty extensive.

However, Santa Cruz’s brand manager, Seb Kemp, feels like the 27.5 wheels aren’t going to die off completely but will remain as a very niche tire. The kind that will be hard to find and that people will have the most luck finding on eBay rather than an actual bike shop.

While the 27.5 isn’t dead just yet, it’s in its a strong possibility that it’s dying, especially with the inception of the 1x drivetrain pushing out the need for owning a 27.5 bike when there are better options on the table.

As these things go, however, who knows what might happen in the next five or ten years? There could be a reason for the 27.5 to come roaring back.

Between 1987 and 2009, Iron Horse Bicycles was a maker of racing and mountain bikes in New York, USA. But are Iron Horse Bikes good? Iron Horse is undoubtedly a solid brand. They not just focused...

Are you in the market for a new bike but not sure what is best? With the variety of brands available, you might wonder, are Scott Mountain Bikes good? Scott mountain bikes are excellent for a bike...